From Electrician to Seminary Graduate

Al Barrera was an electrician in his mid-20s when he moved to Colorado in 2000. “I had high aspirations,” he joked. “I wanted to buy a house and get a dog.”

Connecting with Heart of the Springs Church, Colorado Springs, changed his aspirations and began his journey to May 12, 2018—the day Barrera graduated with a Doctorate of Ministry from Gateway Seminary, Rocky Mountain Campus track.

He joined the college ministry where leaders intentionally discipled him. He met his wife Marcy and credits her with being “beside me at every step of this journey.”

In 2001, “I found myself being asked to teach,” Barrera said, but he thought greeting was a better fit. “What I wanted to be was an individual who was the friendliest face and the best greeter I could be…I wanted everyone to come in and feel immediately welcome and at home. That was the bulk of what I thought I should do.” He did not picture himself in ministry leadership.

By 2002, Barrera was teaching frequently, but still not completely comfortable. The church’s transitioning of leaders left a void in the college ministry that he was asked to fill in early 2003. After praying and talking with Marcy, he accepted the position.

“I found in the midst of that, I started having moments of envisioning more for the group —more in the way of discipleship and more in the way of reaching out to people who didn’t have a relationship with Jesus Christ.” He led with the more in mind. He organized multiple ministry events, within and outside the church. He led small groups and discipled men individually. All the while, he continued working his day job.

Then came the day God gave Barrera definite direction. It was fall of 2003. He was working at an Air Force base, doing what electricians do. “As I’m landing hundreds of wires (it was kind of monotonous work), I had this feeling. It was a thought, but not an audible voice, that said, ‘Why can’t you serve in ministry leadership?’ I sensed it and thought about it and said, ‘Because I’m an electrician.’” A few minutes later the thought repeated, and his reply was the same. The third time Al said, “I thought it was because I’m an electrician, but I don’t know.”

Earning his Master of Divinity, Barrera says, was the foundation that allowed him to move into ministry in a different role, pastor of Calvary, Monte Vista. “As I walked out of my MDiv process, I felt prepared with the basics and foundation for what I would encounter in ministry leadership as pastor of a local church.” Church planting classes equipped him to lead Calvary to catch a vision of being a multiplying church in southern Colorado. They planted a church in South Fork while he was pastor.

Then God moved Barrera into a new ministry position, Church Planting Catalyst in the Denver area. He enrolled in Gateway’s Doctorate of Ministry program to become better equipped for the task. He trusted the training to keep him moldable, teachable, and confident in God’s direction.
Barrera’s Doctor of Ministry project’s goal was to lead established churches to partner with church planters. Three pastors completed the six-week training he designed and are leading their churches to become planter partners. Barrera hopes his project will become a tool to equip churches to teach other churches to partner with church planters through prayer and participation, not just through financial support. 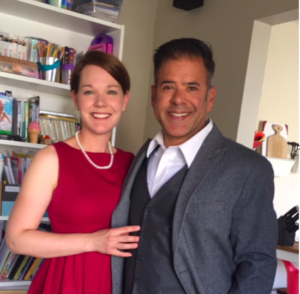 Barrera affirms the role of Gateway in ministry preparation. “Seminary is a great tool to refine your calling,” Barrera said. “It expands your view of life, totally expands your view of God and His goodness, and the depth of the Word of God. It allows you to discern calling as a process instead of one-time event.”